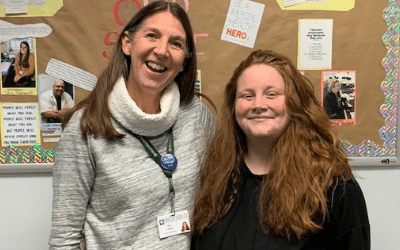 “I am so happy I have the opportunity to talk about my experience with Project Independence and Lori.  She truly has been nothing short of an absolute godsend and a miracle worker! When I went into foster care it felt a lot like I had no one in my corner and then I met her, and everything sort of fell into place after all of the lessons she had to teach me.”  Angela – Age 22 – Toms River

When Angela was 14, her stepfather, a man she admired and respected, passed away.  Her Mom, suffering from bi-polar depression, contracted an illness at the nursing home she was working at, ended up losing her job, losing her health insurance, and unable to afford her bipolar medications.  She returned to heroin, which she had successfully quit years before, and the family situation began to spiral out of control.  There was abuse and neglect, and Angela turned to alcohol and contemplated suicide.  When she was 16, she and her nephew (age 6) were removed from the home and placed into foster care.

When she was a senior in high school, she joined Project Independence.  Project Independence is a program of Preferred Behavioral Health Group that provides life skills for children in out-of-home placements, such as foster care.  Working with Lori O’Brien, she realized that she would be able to realize her dream of attending college – which she never believed would happen – “it was like a dream come true,” she said.  She and Lori worked on budgeting, money management, college application forms, and searched for grants, scholarships, and other financial aid.

The following year she enrolled in Ocean County College where she earned her Associate Degree in Criminal Justice two years later.  But she is not finished with her education.  Today, at age 22, she is a Junior, living at Ramapo College, majoring in Psychology with a minor in Forensic Criminology!  It’s a challenge – she works several jobs and is in school full-time, but she is determined with a will to succeed.  She plans to earn her master’s degree in Forensic Psychology.  When she is not living at school, she stays with her Mom, who has been drug-free since a few months after Angela and her nephew were removed from the home.  They are working at rebuilding their relationship.  It isn’t easy, but according to Angela, “being bitter takes too much effort…I’m working at compassion.”

Angela credits Project Independence with giving her the tools she needed to succeed.  “I go to Lori with all of my questions, school and general life- related.  I know for a fact that without Lori, I never would have made it to being a junior at a college I’ve loved since I saw it.  I never even thought I would make it to college.  I didn’t have a college fund, I had no resources, no money for tuition or books, nor did I have a clue about all the steps I needed to take to start and then continue my education.  Lori has been and always will be a shining beacon of hope.”