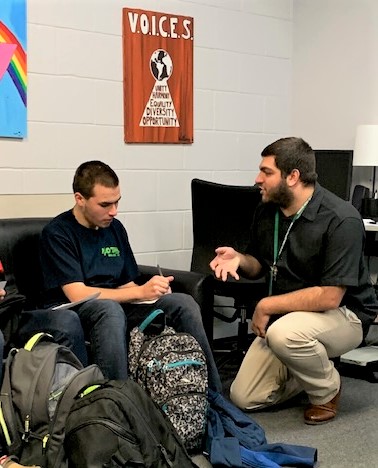 Brick, NJ—When Justin was accepted as an Intern in Preferred Behavioral Health Group’s School Based Youth Services Program (SBYSP) at Brick Township High School, he was hoping for a good experience for his final year as a social work major student at Rutgers University. He is now realizing that this experience is providing both an opportunity for him to uniquely help students and an opportunity for him to forge his own path toward self-discovery.

Justin, now 25, grew up in Brick Township in a loving family. When he was middle-school-aged, he began to realize that he was “not like the other boys” when it came to his sexuality, and realized he was gay. He often struggled with anxiety and panic episodes as he grappled with understanding himself and seeking his own place in the world. He acted out with different types of rebellion, and when he started at Brick Township High School as a freshman, he was put in remedial classes.

As a sophomore, a friend invited him to a Gay Straight Alliance club meeting, one of the groups coordinated by the SBYSP at the high school.  Justin enjoyed the group meetings and they gave him confidence to be comfortable with who he was. In addition to hosting groups and providing programs centering around mental health issues, the SBYS staff are professional counselors who offer an open-door policy for students needing counseling or a listening ear.

Justin met Dave Seegert, the director of the SBYSP; and the drop-in policy allowed him to spend time with Dave several times a month whenever he needed someone to talk to about his emotions and anxiety. During the next few years, Justin graduated out of the remedial classes, and Dave was his “go-to” and helped keep him centered. “Dave gave me the confidence to believe I had strengths and helped me to accept myself,” said Justin.

After graduation, Justin spent several years at Ocean County College discovering his strengths and then embarked on a path to become a Social Worker. He enrolled in the Rutgers BSW (Bachelor of Social Work) program and will now graduate in the spring.

When choosing his internship location, Justin had two goals in mind. He wanted to work with teens and wanted to be involved with the LGBTQ community. He reached out to Dave, was accepted, and was on his way back to the high school he graduated from not that many years ago.

What’s it like to be back? Justin is realizing how important the SBYSP was for him as a student and is intent on giving back to those with whom he shares a similar path. As an intern, Justin is running several lunch groups, sees students one-on-one, and is facilitating group activities in the classrooms. Dave is now his supervisor, a different role than a counselor, but Justin sees him as his mentor. “Now I have an even greater respect for him; he has so much to do, but still makes time for me.”

Upon graduation, Justin plans to earn his Master’s Degree in Social Work and then become a Licensed Clinical Social Worker; quite a journey from his early days in high school!

“In the School Based Youth Services Program, I made a lot of friends and connections; it prepared me and taught me how to manage the panic and anxiety better. I learned that I can push through, no matter what. The program is invaluable – an amazing program with people that care.”