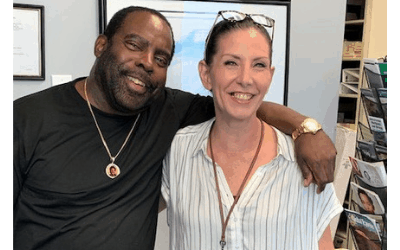 “Fighting an addiction is harder than fighting in a war…in war, your fellow soldiers have your back; in the drug world, it’s brutal; no one has your back.”

Former Army Ranger Marvin speaks candidly about his history of drug addiction and recovery. Raised in Tinton Falls and Neptune in a stable family with lots of love and support, Marvin joined the army in 1983 after graduating from high school. It wasn’t just the army but the Army Rangers, the elite airborne special operations force. In the early 90’s, he was sent to Baghdad and served honorably for 5 months during Operation Desert Storm. Prior to joining the Army, Marvin had no problems with drugs.

But the war took its toll. Returning to civilian life following an honorable discharge, Marvin was wracked with nightmares and sweats. To deal with it, he turned to drug use, and then drug sales to make money to buy the drugs his body was craving. For the next 25 years, Marvin struggled through several incarcerations and drug treatment programs. All of his jail sentences were a result of his addiction; for possession, selling drugs, and parole violations based on drug use. He was self-treating his Post Traumatic Stress Disorder (PTSD) with drugs rather than seeking treatment for it.

In September of 2018, Marvin went into another drug treatment center, and upon his release, he learned about the STAR program through a relative who was in the program. STAR (Support Team for Addiction Recovery), funded through the Division of Mental Health and Addiction Services, is an initiative designed to provide case management and recovery support services for individuals with opioid use disorders. It is now offered in 11 counties and expanding soon to all 21 – Preferred Behavioral Health Group manages the team for Monmouth County.

Struggling, but determined to continue to stay abstinent after being home from treatment for 6 weeks, Marvin met Nicole (pictured here with Marvin), a Peer Recovery Specialist (PRS) for STAR, and he found his “lifeline.” Peer Recovery Specialists are all recovering addicts and are part of each STAR team. Nicole, in recovery since 2015, had also struggled for years to find her way out of her drug addiction but finally discovered her self-worth and sobriety and found her passion working with this population. She has been with STAR since its inception in February of 2018.

Nicole believes the STAR program fills a void – when people leave treatment programs, often the hardest part is getting connected to existing resources in the community and staying away from the people and environment that were harmful. “This is the missing link,” she says, “helping people find the practical support they need to become and remain clean.”

Marvin found a mentor in Nicole and drew strength from her. “Nicole is great; she never wavers. Whatever you need, she is there for you – she is caring and strong.” With Nicole’s support, Marvin is close to securing permanent housing (he is now living and caring for his mother in Long Branch), he attends PBHG group sessions and is active in Narcotics Anonymous (NA).  He is also getting his driver’s license back (he lost it years ago because of DUIs and other fines and violations), and he has decided he wants to become a Peer Recovery Specialist himself. He recently successfully completed the Recovery Coach Academy course and has 2 additional courses to take. Nicole believes that as a Peer Recovery Specialist and a veteran, Marvin will be able to uniquely help fellow veterans who are suffering. “He understands them, because he’s been there,” she said.

Marvin is now finally receiving support and treatment for his PTSD through the Veterans Administration, and he has also applied for benefits he earned as a serviceman – disability benefits, a VA mortgage loan, and GI education benefits for his youngest daughter to attend college.

He is immensely grateful to his family, and he has a very close relationship with his parents, his siblings and his children. “Without my family, I would probably be dead or in jail for the rest of my life. My parents have not left my side.”

When speaking about her work with STAR, Nicole says, “I love it – I was able to take the worst part of my life and turn it into something positive.” She has a special understanding of the emotions and struggles facing those she works with, because of her personal experiences. She wants to continue her journey and plans to start taking classes to become a Certified Alcohol and Drug Counselor.

For Marvin, it’s one day at a time but he feels confident and strong. “I am where I need to be, learning to forgive myself and looking forward to my future.”

September 2020 Update: Marvin is about to celebrate 2 years in recovery. He is now employed by Preferred Behavioral Health Group as a Peer Recovery Specialist and as a Casemanager in our Ocean County Veterans Program. He spends his days helping others find their way.

His next career goal is to work towards obtaining his Certified Alcohol Drug Counselor certification.

He is now living on his own in an apartment in Keansburg with a gorgeous water view. His daughter Natasha graduated high school this year with an accelerated Associate’s degree from Brookdale and is now attending Columbia College in South Carolina majoring in Business Administration. He is one proud Dad!

He is so appreciative of the support he continues to receive from his PBHG colleagues. “Everyone, from our CEO Mary Pat to everyone I work with, treats me so well, like gold. I am so grateful.”

During Recovery Month this year, Marvin is joining the voices for recovery and we celebrate his success!

For more information on the STAR program, contact Jean Hennon at jhennon@preferredbehavioral.org.